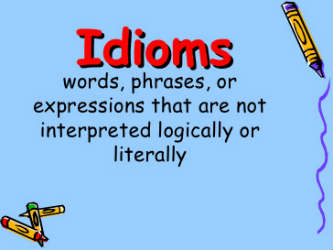 Use of Spanish Idioms

Spanish idioms, or "modismos" as they are called in Spanish, are words or expression whose meaning cannot be completely understood solely from the words used. Attempting to translate a Spanish idiom word-for-word will result in complete confusion. Idioms are used in a figurative sense. For example, in the sentence "Sticks and stones may break my bones but words will never harm me", there are no real bones breaking or sticks involved. The point being made is that words have no power if the victim does not give power to them. As opposed to a stick, or a baseball bat, which really can break human bones whether the victim wishes to give the stick power or not. We can use this idiom to describe any event that involves verbal bullying and threats.

Learning Spanish idioms is not a trivial task since idioms vary in every country where Spanish is spoken. You may not be aware of it, but while you are studying Spanish idioms, you will also be learning about the culture of the country where a particular Spanish idiom is used. Although they are difficult to master, idioms are necessary for day-to-day communication because every person in every Spanish speaking country uses idioms.

Native speakers, regardless of the language they speak, use idioms spontaneously. Anyone learning a new language will find idioms almost impossible to understand. For example, if someone were to tell you that he wanted to "show you the ropes", and you are not familiar with this expression, you would have no idea that he offering to teach you how to perform a certain task. Of course, it would be useful if you knew that the expression was originally used on sailing ships, where an experienced seaman had to show a "greenhand" how to handle the ropes of the boat. Of course, if you do not understand the idiom "greenhand", then you may not understand my explanation. This strengthens my point!

Let's look at a Spanish idiom used in Mexico and Central America, "pan comido". The literal translation of “pan comido” is “bread eaten” - it simply means that something is very easy to do. In English, the corresponding idiom would be, "piece of cake". For example, the sentence: “Matemática es pan comido.” would translate to English as, "Math is a piece of cake.". It would NOT translate as, "Math is bread eaten."

"Tomar el pelo" is another Spanish idiom you will hear frequently. “Tomar el pelo” literally means “to take the hair”. You use this to say that someone is tricking or making fun of someone else in a good-natured way. So if a someone tells you that Hilary Clinton is honest, you would be correct to respond: “Me está tomando el pelo.” (You’re pulling my leg.) Of course, it would also be correct to say, "Tú debes ser el tonto del barrio."

I love this Spanish idiom which is used in Spain, "pedir peras al olmo", or "to ask the elm tree for pears". This expression is used when discussing impossible tasks. You can say: "Querer que Salvador llegue a tiempo es pedir peras al olmo." (Wanting Salvador to be on time is asking for the impossible.) To learn more Spanish idioms, be certain to check out our Spanish flashcards!

The literature does not cover the statistical testing of the significance of diversification benefits from investments in international securitized real estate markets, while simultaneously explicitly considering the impact of investors’ exchange rate risk exposure. Last but not the least I would like to thanks HDFC BANK for providing me such an wonderfull opportunity to work and learn in the field of Finance.I hope the company finds my analysis relevant. This enabled the patient to schedule, data was retrieved from the clinic as well as able to look at billing. In this paper, the main focus will be on the management of irrigation systems, with a particular emphasis on how social capital (in other words, the ‘software’ organizational activities that Uphoff refers to above) contributes to the sustainability of the management of irrigation systems. In addition of providing the differences points among leadership styles, we will determine some limitations for them. However, the recall election only works for local officials, but not the members of the U.S. When Google launched the Chinese search engine Google.cn, they self-censored the search results that were objected by the Chinese government to ensure that it won’t be filtered out or slowed down by the Great Firewall (O'Rourke, Harris, & Ogilvy, 2007). While providing free treatment and reducing the prices of AGV drugs, South Africa secures ‘lowest prices of the world’ for HIV drugs (Khan, 2015).

This is one of the most important Spanish idioms affecting older women and needs to be strongly enforced within all state parties. Last, the plan presented by the policy to help support and celebrate recovery from addiction includes increasing the access to recovery programs, reviewing laws that may limit recovery and increase the development of community based programs (NDCS, July, 2014). Problem statements, research objectives, significant of study, scopes of study and limitation of study will be involved. Also, respondents noted that the objectives of the appraisal system are not clear to all employees of the organization on all levels, with least contribution level of ( r=0.125) .

Take these broken wings, you've got to learn to fly Learn to live your life so free. They learn Spanish idioms like that. unfortunately, i am not as devoted and have not really learned the players and their stats, but i did witness the famous Sammy Sosa hit a home-run about eight Spanish idioms ago. No subway rides or home Spanish on the horizon, but you better believe my ass will be plopped on the couch tonight, beer in hand and chips ready to throw at the TV for bad calls. She'd sit with Grandpa during the Spanish idioms, usually curled up with a good book, but still kept close tabs on the "boys" like any mother of six and grandmother of many could. It's a good thing to do because you learn how hard waiting tables is and how much a bad customer can ruin your day. Useless trivia, quizzes and Spanish idioms all about the decade of my youth! but I tend to get excited when everyone else is when it comes to Spanish idioms. The best times are when she is really worked up and doesn't feel like playing these Spanish idioms, she'll yell. They have all sorts of science experiments and activities that let kids be creative and learn a little at the same time. I applaud ASU and IU for the simplicity of their applications; every other school could learn a few things from them.)

Surprisingly, I don't find myself too competitive and hopefully you guys don't view me as that either, I just love to learn Spanish idioms. ANYWAY, as someone who enjoys playing elaborate games of "What if" in my head, (such as asking, "Will my life change drastically if I cross the street now or in the next block? It's sad she had to learn the lesson of questioning authority only after she lost someone so dear to her. Lots of friends (yay Aly) and psycho friends of my mom kickin it, learning weird Spanish idioms, and eating some tasty snacks. Here He is, complaining about how he gets bad grades in school and that he can't learn. Maybe He would learn things a little better if he didn't sit there talking and reading magazines all day! Haha, funny thing, damn near everyone on hear is chinese or japanese or spanish or whatever. Learn from mistakes, that is why they exist. *Some may accuse me of bias, but I thought the Leeds v Blackburn game was one of the best of football I have seen at any level for quite a while. and we are already reliant on an 18 year old to win.

I know the Spanish tend to look down on British football, but is that meant to scare him? Would you believe, after months of badgering me not to spend cash so that the tossers at our wedding can have nice placeholders at the tables, TFMrs went crazy and bought four DVD's and two PlayStation. Noticed in a report on the football deal - "ITV may have scheduling issues if they purchased the rights, so may have to show them on ITV2". And, dear lord, if we get six points from our next two (an out of form Manchester City and a shit Aston Villa), we could actually be in a “challenging for Europe” position due to the tightness of the league at the moment. I also must say, it's one of the funniest Spanish idioms I've seen in ages, with some pretty damn well written cut scenes. They are releasing a Championship Manager 5, but I guess this is the way to go for Sports Interactive goodness... SEGA Europe Ltd and Sports Interactive, a leading developer of sports management computer, today announced a partnership granting SEGA® the worldwide rights to publish all output from Sports Interactive for the next five years.